I’d like to think if I were in my own shop with my own machines I would manufacture some fun soft jaw fixture for holding this casting and that it would be elegant and robust and worthy of its own praises. For the time being I get to maintain that delusion because I’m not in my own shop and I’m not using my own machines. As such I cobbled together the workholding shown below. 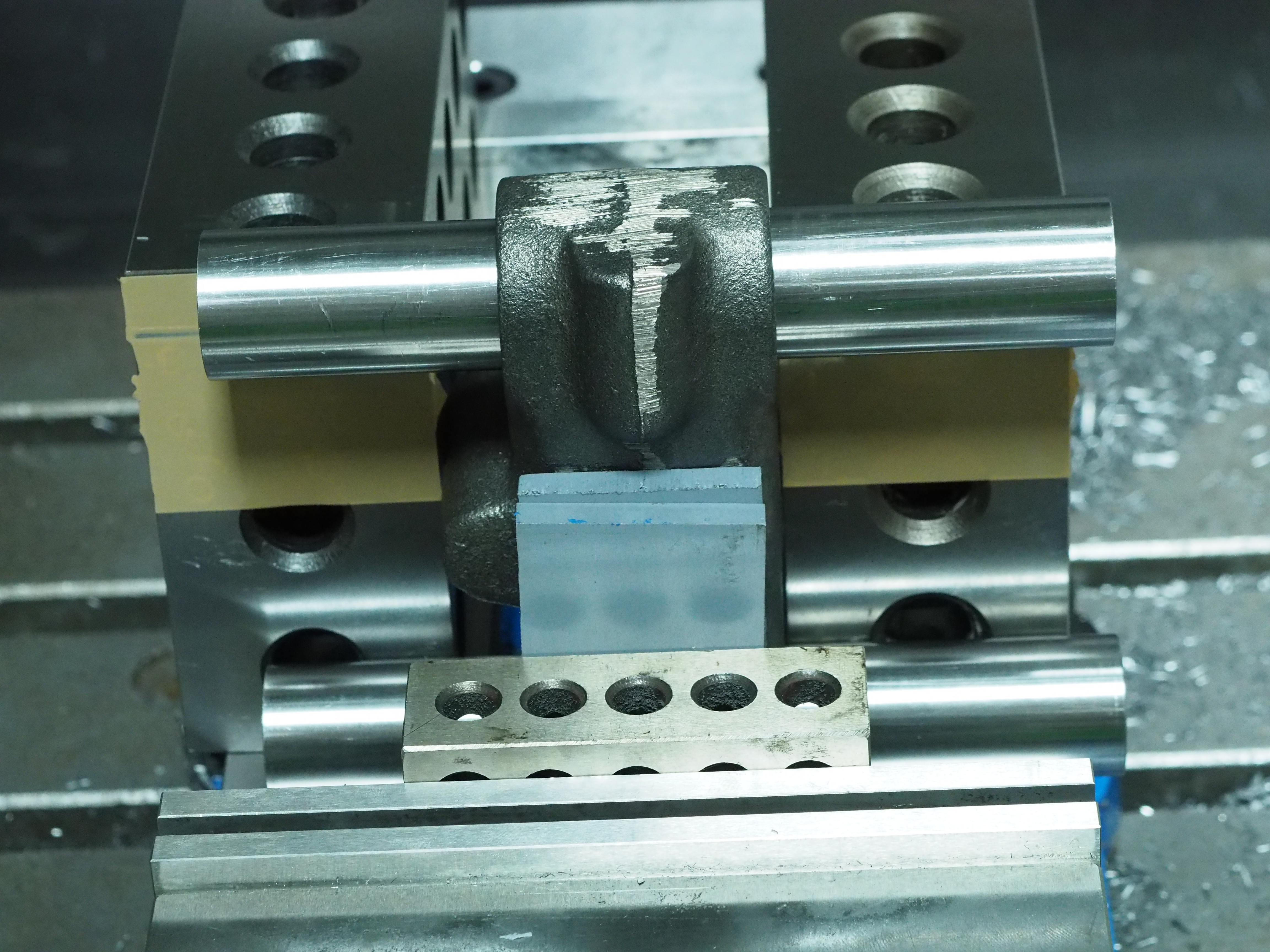 After devising this insanity I decided it’d be a good idea to check it, so I ran an indicator up the bars on both sides. I was surprised to find that they’re sitting square left-to-right, so the bars are in line with the X axis, but they were not square along the Z axis. The top bar was about 0.05 mm further back in the Y axis than the bottom bar.

I tried flipping over and turning around the 2-4-6 blocks and got the same results, so I pulled the blocks out and applied some packing tape to the front face of the blocks. While the tape is slightly thicker than I needed, it also compresses a bit. This brought me much closer to square top-to-bottom. 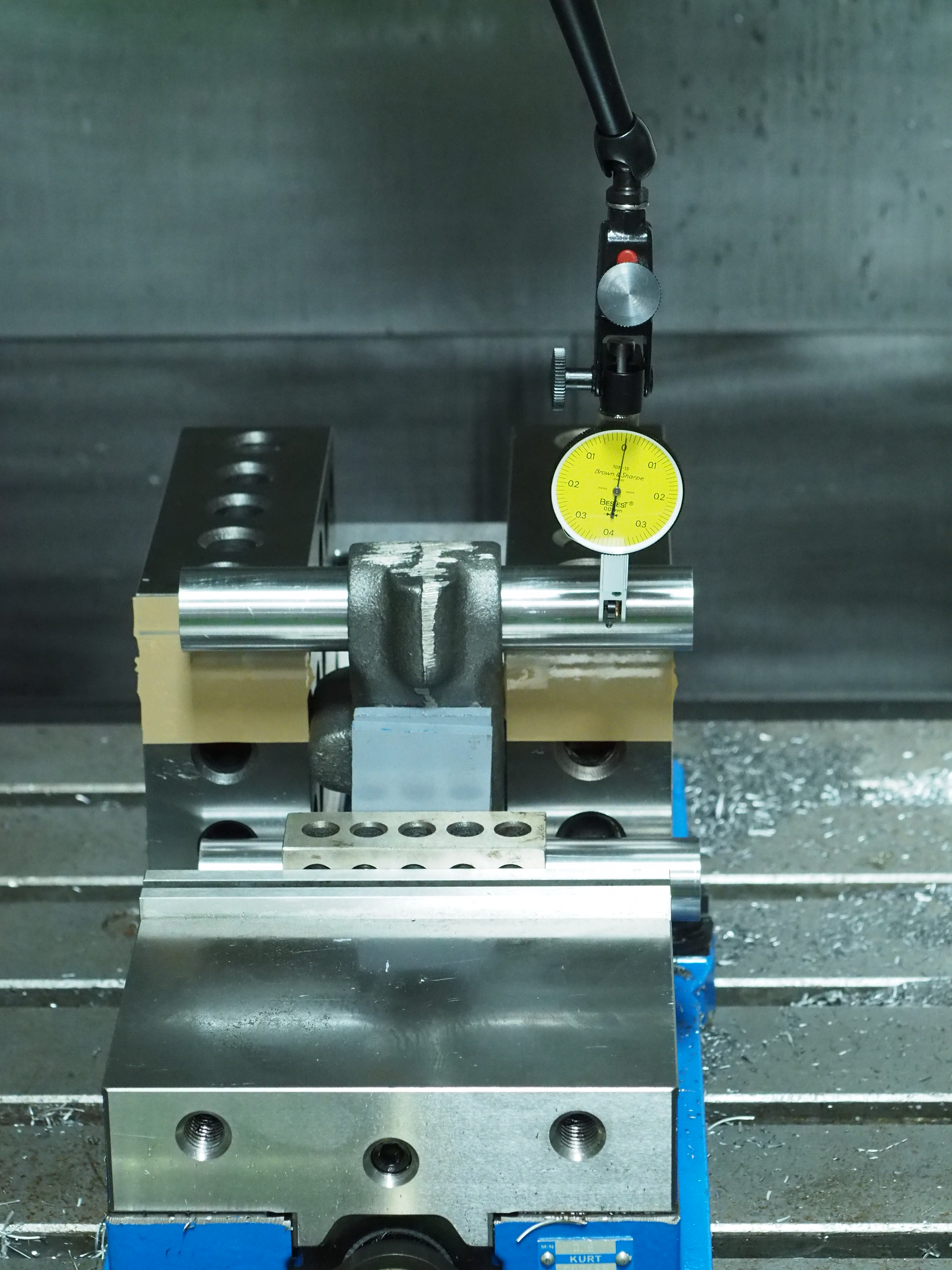 Similar to the machining operations for making my cotter fixture, I based my coordinate system off the top of the top horizontal shaft. This ensures the relationship between the cotter bore and the shaft bore is as intended. To establish this, and similar to my cotter fixture I established the center of the top bar by touching a Haimer 3D Taster off of a gage block set up against the top bar. This provides a full plane for the taster to touch off of.

With the part set up and the coordinate system established it was time for cutting operations. Here we go!

This operation is a good chance to look at the G-Code that Autodesk Fusion 360 posts for the Haas.

There’s something to be learned here. First, the machine this runs on is old enough to drink. So programs are given numbers, not names, and this one thinks its program O01001. Second, the post lies. It says it uses G1 F5000 instead of G0 for rapid moves, but the program has G0s in it. This program includes line numbers, even though the machine doesn’t require it. It can be useful for debugging, as the machine will display the problematic line without saying what line it is in the program. Including these numbers in the program can help. Next, this post puts out a G94. This Haas doesn’t like that. I don’t know what it was supposed to be. Whenever I post for this machine I have to remove that. I’ve considered digging into the post-processor but I don’t intend to do much more with this machine. Most of the rest of the program is straight forward, but what keeps it a compact enough program is that it uses a canned cycle for the drilling itself. This is shown on line N60. I think its really cool when a CAM package and post-processor make use of a canned cycles, especially on these old machines.

After predrilling I did pocketing using a 6.35 mm reduced-shank end mill. I picked up a pair of these end mills specifically for this operation, as the resulting pocket is 13 mm in diameter and over 30 mm deep. Using a reduced shank end mill allows me to have maximum rigidity for whatever minimum stick out I need. I left 0.1 mm of radial stock for cleanup using a boring operation.

So next I’m going to be doing exactly that. Let’s do the time warp again.